Malaysia is a divided nation. 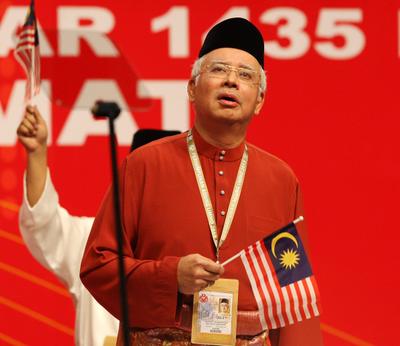 The grim reality of elusive unity, plagued by ethnocentric and ethno-religious divisions, is underlined by the continual existence of fault lines that anthropologist Shamsul A. B. calls ‘axes of contradictions’. The stubborn presence of such social cleavages, after half a century of nationhood, raises the issue of the efficacy of integrative policies pursued by successive Barisan Nasional (BN: National Front) governments.

Momentarily eclipsed by the modernisation ethos of Mahathir’s Vision 2020 and Abdullah Ahmad Badawi’s Islam Hadhari (civilisational Islam), the ‘national unity’ agenda has made a comeback during Najib Razak’s era since 2009 in the form of his ‘One Malaysia’ (1Malaysia) scheme.

It has not been smooth sailing for Najib. It is understandably difficult for him to admit that the multiple polarisation of Malaysian society was effected at the hands of none other than his colleagues and former bosses in the ruling United Malays National Organisation (UMNO), let alone for him to exorcise completely UMNO-linked ghosts of social fragmentation.

Rising politically via UMNO and its entrenched system of vested interests, Najib’s political survival depends on UMNO, whose apparent improvement in the 13th General Elections (GE13) of May 2013 has lulled its leaders and members alike into believing that continual UMNO hegemony could be best brought about by appealing to Malay ethnocentric sentiments.

Najib in all probability realises that it was UMNO internal politics rather than opposition attacks that had led to the undoing of his predecessor Abdullah Ahmad Badawi, whose administration was brutally cut short following BN’s post-GE12 imbroglio in 2008. Abdullah’s ouster meant that his pluralist vision of a unified nation driven by enlightened interpretations of religion (as encapsulated in his conception of Islam Hadhari) never tasted success.

While some figures within the UMNO ruling establishment lament with other concerned parties at the growing divide within the Malaysian populace, Najib’s inability to stem the tide of UMNO grassroots’ embrace of ethnic exclusivism was made all too clear during the recent UMNO General Assembly (5–8 December 2013). The Assembly was preceded by Najib’s launching in September 2013 of a slew of Bumiputera economic empowerment programmes, which some have opined as the outcome of sustained pressure from the UMNO rank and file, besides being a commensurate reward for the Malays’ support for BN-UMNO in GE13.

The Assembly proper was laced with vociferous statements that make a mockery of Najib’s One Malaysia vision. Delegates openly called for, among other things, the replacement of One Malaysia with ‘One Malay’, the denial of Bantuan Rakyat 1Malaysia (BR1M: 1Malaysia People’s Assistance Funds) cash entitlements to opposition party supporters, and the re-orientation of national economic policies such as those pertaining to government-linked companies to the advantage of the Malay community.

Reacting to allegations that UMNO’s voices on the ground were dangerously treading on ethnocentrism, Najib meekly denied that UMNO had degenerated into an overtly racist party. The need for such a denial itself is indicative of the insular trajectory that the UMNO grassroots are taking, even while Najib ostensibly calls for Malaysians to become more globalised. Clearly, after four years at the helm of UMNO, BN and the nation, all of Najib’s expletives on One Malaysia have failed to strike chords even among UMNO’s own members, some of whom are unfazed at being labeled ‘racists’ so long as what they perceive as Malay rights are legally protected.

If Najib cannot put even his own UMNO house in order, what hope does he have of repairing the country? Not surprisingly, the UMNO-led BN’s capacity and willingness in healing Malaysia’s societal fragmentation has been earnestly questioned by informed observers.

Ironically, the utopia that UMNO has in mind is not even Malay-centric, such that Najib’s protestations against UMNO’s alleged racist strand is, taken at face value, tenable. Exclusion from the UMNO-approved body politic is not based on racial affiliation per se but rather on a skewed (mis)understanding of what constitutes being Muslim and Malay. A Malay-Muslim who chooses not to be part of this entity lays himself vulnerable, in UMNO’s eyes, to accusations of disloyalty and even to stripping of citizenship — a call often heard in the past few years.

Although Najib has been strongly urging Malay-Muslims to embrace moderation in their understanding and practice of Islam, it is UMNO’s grassroots who have been enthusiastically imbibing Islamist conservatism to the detriment of harmonious ethno-religious relations.

In the president’s closing speech, exhorting UMNO members to reclaim popular Islamic ground, Najib unabashedly claimed that it was UMNO who forked out funds to build mosques and suraus (prayer houses), only to see them later taken over by anti-UMNO elements. From the top to bottom of UMNO’s hierarchy, there seems to prevail a widespread sense of exclusive entitlement to the nation’s coffers and assets.

As greed multiplies, corruption and ill-gotten gains continue to mar Malaysia’s economy. Massive sums of money are unlawfully siphoned out of the country year in and year out, contributing to the downward rating of Malaysia’s creditworthiness. If all groups are treated as national stakeholders who deserve to be rewarded for hard work irrespective of political and ethno-religious affiliations, and readily accept precepts of One Malaysia out of sincere patriotism, one wonders whether the need exists at all to transfer wealth to safe havens abroad. Surely something is wrong somewhere with Najib’s whole national set-up, of which One Malaysia purportedly serves as an important pillar but looks more like a spent force today.

This article is a part of an EAF special feature series on 2013 in review and the year ahead.

The Employees Provident Fund (EPF) is temporarily closing its office and counters in Kangar, Perlis, from April 19 (Monday) until further notice, after an employee at the branch was tested positive for COVID-19. This is following instructions from the…

Any decision with regards to the closure of schools is made based on the joint assessment by the District Health Office (PKD), Education Ministry (MOE) and the state government, said Health Minister Datuk Seri Dr Adham Baba.He said it includes assessme…

— The Association of Private Hospitals Malaysia [APHM] has commended the government’s effort and success in managing Phase One of the COVID-19 vaccination for frontliners particularly the private healthcare workers.Its president, Datuk Dr Kuljit Sing…