Malaysian Prime Minister Najib Razak enters 2014 with one big worry on his mind: how to win — and win decisively — the next general election (GE) that must be called by 2018. 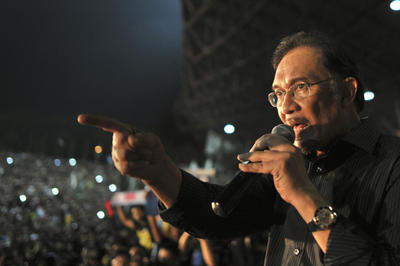 The last one seven months ago on 5 May saw his ruling Barisan Nasional (National Front) coalition in its worst victory since 1969: despite winning the majority of seats, BN lost the popular vote to the opposition alliance led by Anwar Ibrahim. As the New Year begins, the big signal from Najib is that ‘1Malaysia’ will probably have to be set aside as an electoral strategy. This is significant as it could mean that 1Malaysia — his vision of a unified, cohesive and inclusive plural society that was much touted in the 5 May GE — is as good as thrown onto the backburner.

At UMNO’s recent 5–7 December general assembly (UMNO being the anchor party of the multi-racial BN coalition) 1Malaysia was hardly mentioned in Najib’s keynote speech. Yet when resolutions were debated, one delegate spoke to kill the whole idea, calling for 1Malaysia to be replaced with ‘1Melayu’, or 1Malay, referring to the majority community that UMNO represents. Najib did not respond in defence of 1Malaysia. In fact, his speech during the assembly was primarily about advancing the Malay and Muslim agenda — signifying a major refocusing on this core constituency as UMNO gears up early for the 14th GE.

Uncontested as UMNO president in party elections prior to the assembly, Najib now has one eye on his own political survival. The still-influential former prime minister, Mahathir Mohamad, has been uneasy with the BN’s worst showing at the 5 May polls and may want Najib out.

As Najib’s popularity dips due to some economic belt-tightening policies expected in the New Year, his swing to appease the UMNO conservatives is not surprising. Party hardliners are convinced that the multi-ethnic BN’s political survival rests increasingly with UMNO, whose survival in turn rests on the Malay constituency, which is synonymously Muslim. While 1Malaysia was designed to embrace all of Malaysia’s races, its failure to attract non-Malays, especially the ethnic Chinese, at the last GE has weakened Najib’s hand.

The conservative faction’s argument is this: forget about winning over the non-Malay vote and focus on winning more of the Malay and Islamic ground. UMNO is strong enough to stand on its own. While the BN coalition won 133 seats in GE13, UMNO alone won the most seats with 88 — even more than any of the opposition parties individually, whose combined tally of 89 seats was just one more than UMNO’s. In other words, it is UMNO that will remain the backbone of the political system. Thus Malay political power will be pivotal to everything in the country — from political stability and security to economic progress and development.

This conservative logic formed the bedrock of the ‘back to basics’ strategy that was spelt out in no uncertain terms by Najib, whose speech was themed ‘Fortifying the Future’. Going forward, UMNO will pursue three strategic thrusts — or what Najib called the ‘three messages from the assembly’: a turn towards Shariah; a stronger Malay and bumiputra agenda, for which, he said, UMNO need not be apologetic about; and a ‘transformed UMNO’ as a party of the 21st century.

Under the first thrust, becoming more Islamist for a Malay-nationalist party like UMNO is an equally significant shift that is clearly geared to position itself as the primary political vehicle for the Malay/Muslim constituency, thus pitting it in a more intense contest for power with the opposition Islamist PAS, even as UMNO paradoxically woos PAS for unity talks. UMNO’s drift towards a more Islamist identity was marked by a highly controversial drive to pitch itself as the defender of Sunni Islam in the face of what UMNO paints as the growing threat of the Shia sect in the country which it regards as deviationist. The UMNO constitution would be reworded to define the official religion as ‘Sunni Islam’, not just simply Islam. That this move is partly politically motivated is seen in the immediate targeting of the PAS deputy leader as a closet Shia and therefore a threat.

The second thrust for a greater push for the Malay and bumiputra agenda is clearly aimed at solidifying the Malaysian Peninsula-East Malaysia axis around the Malay core. Najib conceded the crucial role of the ‘fixed deposit’ states of Sabah and Sarawak in BN’s ultimate win in the last GE — as many see it, if not for these two states there would have been a change of government in Malaysia. With Najib’s renewed emphasis on the Malay and bumiputra agenda, the New Economic Policy that officially ended in 1990 has been resurrected in all but name. CEOs of all government-linked companies have been given KPIs to realise this goal or see their contracts not renewed.

To complete the three-pronged strategy, UMNO will go all out to win the young voters. In the next GE, some six million new voters will be voting for the first time. The majority are likely to be anti-establishment and anti-UMNO, and could bring about a change of government. No wonder Najib’s third thrust involves winning over the young voters and mastering the new media the young are savvy with.

UMNO’s eagerness to recover its eroding political ground has seen it responding in unexpected ways, with implications yet to be fully fathomed. Its readiness to go by its own drumbeat is a warning to friend and foe alike that the rules of the game will be set by UMNO alone. To its ethnic-based political allies in BN, which are facing their own internal crises, the message is that the BN power-sharing system will be on UMNO’s terms. To the opposition, the message is clear: whoever controls the Malay and Muslim ground will control power — and it is not going to be the opposition, which is not homogeneous ethnically and ideologically. UMNO is desperate to win. Going forward, all stakeholders in the political system will be forced to ponder what this means for them.

Yang Razali Kassim is a Senior Fellow with the S.Rajaratnam School of International Studies (RSIS), Nanyang Technological University in Singapore.

This article is a part of an EAF special feature series on 2013 in review and the year ahead.

The Employees Provident Fund (EPF) is temporarily closing its office and counters in Kangar, Perlis, from April 19 (Monday) until further notice, after an employee at the branch was tested positive for COVID-19. This is following instructions from the…

Any decision with regards to the closure of schools is made based on the joint assessment by the District Health Office (PKD), Education Ministry (MOE) and the state government, said Health Minister Datuk Seri Dr Adham Baba.He said it includes assessme…

— The Association of Private Hospitals Malaysia [APHM] has commended the government’s effort and success in managing Phase One of the COVID-19 vaccination for frontliners particularly the private healthcare workers.Its president, Datuk Dr Kuljit Sing…