Malaysians are evidently freer today to openly criticise their government than they were prior to 1998. 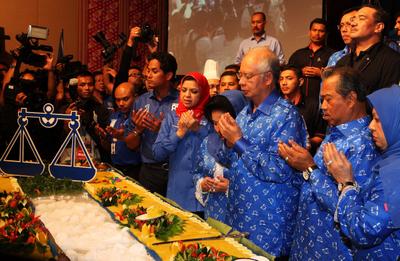 But fundamental reforms that civil societies had hoped for during the internet-driven Reformasi movement in 1998 and Bersih rallies (in 2007, 2011 and 2012) are wanting.

Instead, Malaysians have a government focused on achieving a high-income developed-nation status by 2020 while eschewing the cultural prerequisites of a normative democracy — freedom of access to public information, free and fair elections, vigilant media and press freedom.

Civil societies had a glimmer of hope when Najib Abdul Razak was sworn in as the country’s sixth prime minister in April 2009. Addressing journalists at a media awards night in Kuala Lumpur, Najib said: ‘If we are truly to build a democracy that is responsive to the needs of all the people, we need a media — both old and new — that is empowered to responsibly report what they see, without fear of consequence, and to hold governments and public officials accountable for the results they achieve or do not achieve’.

The Centre for Independent Journalism and Writers Alliance for Media Independence submitted to Najib on 3 May 2009 a roadmap setting out the directions for media freedom and democracy. But roadblocks remain. Worrying recent cases include the suspension, later lifted, of The Heat in December 2013 for a series of reports on the prime minister and his wife’s extravagance; the revocation of the printing licence of FZ.com in August 2013; and the denial of a printing licence to the online news portal Malaysiakini, a decision reversed by the High Court in October 2012.

There have been some advances. Freedom of information laws were passed in the Opposition-controlled states of Selangor and Penang in 2011, which allowed for the disclosure of public information. But amendments to the Penal Code, a federal law that prohibits the leaking of government information to the media, and the Official Secrets Act, render the FOI legislation practically meaningless.

A combination of structural, political, legal and professional factors have led to a fragmented and unbalanced media landscape. Media companies and conglomerates are owned by political parties, leading to partisan political reporting. Establishment newspapers are increasingly deviating from fair treatment of public interest issues. Libel suits against the mainstream papers (for example,Anwar Ibrahim vs Utusan Malaysia; Suaram, Bersih & CIJ vs New Straits Times ) have seen the media losing cases. The media market is also divided along technological lines: a content analysis of the general election coverage in May 2013 shows the mainstream media are explicitly  pro-government and online news portals generally pro-Opposition.

The media market is also segmented by ethnicity and language, although the mainstream English language papers are widely read. Vernacular papers, accessible online, cater to the communal interests of those who speak Mandarin, Tamil and Bahasa. Language, ethnicity, religion and politics in the Malaysian context are inextricably linked, and since senior journalists and editorial policymakers in the mainstream papers, television and radio are predominantly Malay, these considerations do creep into the editorial process.

For instance, in a commentary in the Bahasa national daily Utusan Malaysia, the president of the National Association of Malay Journalists (NAMJ) and Writers of Malaysia, Alias Mohamed, wrote that if Malay leaders continued to accommodate the Chinese, they would risk losing their Malay authority and political leadership. Alias Mohamed’s emphasis on ‘Ketuanan Melayu’ (‘Malay Lordship’ commonly reinterpreted as ‘Malay supremacy’) could legitimise a hegemonic framework that NAMJ members could arguably see as acceptable in framing their coverage of racial and religious controversies, such as the Bumiputera economic agenda, preferential treatment policies, the child conversion (to Islam) bill, the ban on Christian churches from using the word ‘Allah’, and the post-election power relations structure.

Najib has attempted to demonstrate his commitment to accountability and transparency on his 1Malaysia blog. He remarked that ‘democracy is not just about elections, it is about addressing the needs of the people in between elections — and that means getting unfiltered, first-hand information through meetings, visits and social media about the things you really care about’. As Najib promised in 2009, the government repealed the Internal Security Act (ISA) in September 2011.

But the ISA was replaced by equally repressive measures in July 2012 by amendments to the Evidence Act 1950 and the Security Offences (Special Measures) 2012 Act, which provides for the detention of suspects for 28 days compared to indefinite detention without trial under the ISA. In the same month, the Printing Presses and Publications Act was amended whereby newspapers no longer need to apply for an annual renewal of printing permits, but which the home minister at his discretion can unilaterally revoke or even deny the right to apply for a permit. Malaysiakini and Fz.com are recent examples.

It has been one step forward and two steps back for media reforms, greater accountability and transparency under Najib’s administration.

Eric Loo lectures in journalism at University of Wollongong. He is founding editor of Asia Pacific Media Educator, and writes a column for Malaysiakini and The Edge Malaysia.