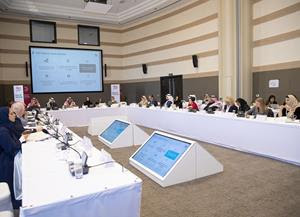 The Civil 20 Virtual Summit has convened with more than 4,000 civil society leaders representing 109 countries at the biggest non-government organizations gathering in the G20 history, channeling their concerns and demands ahead of the G20 Virtual Leaders’ Summit next month. Riyadh, Saudi Arabia

RIYADH, Saudi Arabia, Oct. 06, 2020 (GLOBE NEWSWIRE) — The Civil 20 Virtual Summit has convened today with more than 4,000 civil society leaders representing 109 countries at the biggest non-government organizations gathering in the G20 history, channeling their concerns and demands ahead of the G20 Virtual Leaders’ Summit next month.

The Civil 20 Communiqué released during the C20 Virtual Summit, urging G20 leaders to “seize the current historical moment to reflect, correct, and take decisive global action.” The Communiqué warned that the “future is in jeopardy, and we as global civil society are deeply concerned.” The convening NGO leaders noted that “we live in an unprecedented time – not only with a health pandemic and rampant misinformation, but also with the worst economic recession since WWII. Trust in governments, science, and multilateral institutions is in decline. Peace and justice are being undermined. Civic spaces are shrinking. Inequalities are worsening; between the rich and the poor, between genders, and between countries.”

The group did not only sound the alarm, but reminded governments that the “world is not destined to be in turmoil” and that humanity has withstood numerous shared challenges before. It’s time for world leaders to take bold reforms and commit to health, education and social protection investments, while taking ambitious steps towards climate action and biodiversity protection.

The civil society communiqué demanded that world leaders “must choose cooperation over competition; make decisions based on science, solidarity, and public interest instead of lies, profits, and geopolitical considerations.” It also noted the lack of political leadership, weakened multilateral processes, fractured international system, and a closed global policy making approach that only serves private interest and lobbyists. Such stark reality needs a restored faith in multilateralism, supporting the UN-system, and resorting to political dialogue to solve differences, instead of trade wars and misinformation campaigns.

Civil Society leaders emphasized that “global challenges did not start with COVID-19 and will not end when it is under control. The pandemic has exacerbated existing challenges manifested by the current structural ailments of our political, social and economic systems.” They called for world leaders to reverse structural inequalities, and recover from this global pandemic, by implementing inclusive global economic and public health policies, cancelling developing countries’ debt, committing to a people’s vaccine, urgently addressing the growing climate crisis, and supporting the Access to COVID-19 Tools (ACT) Accelerator.

The Civil 20 advocacy consortium of nonprofits also called on G20 leaders to uphold accountability and transparency, especially with stimulus spending and emergency procurement rising. They also urged G20 leaders to commit enough financial resources to deliver on sustainable development for every global citizen, through mobilizing US$2.5 trillion for developing countries using tools for liquidity injection, debt relief, health systems strengthening and committing to the 2030 Agenda for Sustainable Development.

Civil Society 20 (C20) is one of the eight independent Engagement Groups of the G20. It provides a platform of Civil Society Organizations around the world to bring forth a non-government and non-business voice. It provides a space through which CSOs can contribute in a structured and sustained manner to the G20.

A photo accompanying this announcement is available at https://www.globenewswire.com/NewsRoom/AttachmentNg/4fd718d6-4339-4454-a1f9-a34d05ae5ae3

MONTREAL, March 01, 2021 (GLOBE NEWSWIRE) — Brunswick Exploration Inc. (“BRW” or the “Company”) is pleased to announce that is has signed option and purchase agreements from a private company and prospectors to acquire a 100% interest in the Lac Édouard Nickel Project (“Lac Édouard” or the “Property”), located 40 km northeast of the town […]