On 28 March 2014 Manila signed a US$420 million contract for the delivery of 12 Korean Aerospace Industries FA-50 aircraft for light surface attack and lead-in fighter roles. The purchase marked the return of the Philippine air force to the jet age. So far, it is the highest point in the Philippines’ gradual build-up of a ‘minimum credible defence posture’, and a recapitalisation of Southeast Asia’s least-capable military with the support of the US. 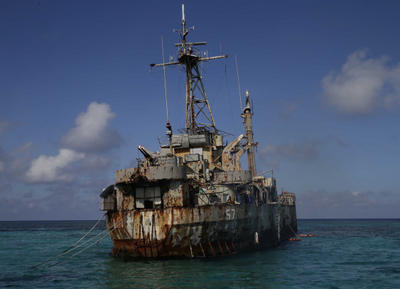 The upgrade can be easily cast as Manila’s response to the increasing assertiveness of China over its territorial claims in the South China Sea (known as the West Philippine Sea in the Philippines). Currently, the most likely flashpoint has shifted to Ayungin Shoal following China’s demand that the Philippines remove a beached Filipino warship that it has converted into an outpost. Tensions between Manila and Beijing reached a tipping point in 2012 with a standoff in Scarborough Shoal when the Philippine Navy’s frigate BRP Gregorio Del Pilar attempted to expel Chinese fishing boats. The incident was framed by Beijing as a disproportionate use of the Philippine military, leading to China’s de facto control over the shoal.

The reorientation is made possible by the winding down of internal security threats, which have preoccupied the Armed Forces of the Philippines (AFP) over the last 12 years. Recent developments such as the signing of a peace agreement with the largest Muslim secessionist group in Mindanao, and the arrest of the top leadership of the communist insurgent movement, have highlighted the improved internal security situation. The current AFP counterinsurgency strategy calls for a phased transition to external defence that is to be completed by 2016.

Yet Manila’s shopping list remains limited by fiscal constraints. The two Del Pilar-class vessels, while adequate for Exclusive Economic Zone and offshore patrol vessel-type duties, carry similarly limited armaments to the Jacinto-class OPVs. The Jacintos prior to the Del Pilar, were then the PN’s most blue ocean-capable ships.  The Del Pilar’s capability to conduct helicopter flight operations and stay on station longer is the only incremental improvement it has over the Jacintos. The addition of expensive systems such as anti-ship missiles and anti-submarine warfare equipment is highly contingent on additional funding.Concerns have been raised over whether supplemental funding for the AFP will continue after the end of President Aquino’s term in 2016. Aquino has a keen personal interest in military equipment and has thus provided an important impetus for greater defence resource allocation. A less enthusisatic President could translate into decreased defence spending and derail AFP modernisation.

The AFP also appears to want to diversify the capabilities of its prospective assets. It has sought to cast equipment acquisitions such as the AW109 PN Multipurpose Helicopter purchase, the Bell 412 Combat Utility Helicopter, and the Strategic Sealift Vessel as multi-use platforms.

As was demonstrated by the long lead-up to the signing of the FA-50 contract, there is more political resistance to equipment acquisitions that are primarily framed for warfighting. The apparent preference for multi-role assets is also understandable given the myriad of non-hostile military operations undertaken by the AFP such as disaster relief. But it must be stressed that such tasks act as a distraction from fully transitoning the AFP to external defence. Military involvement in duties other than warfighting are  are symptomatic of the Philippines’ overall lack of civilian civil defence capability, specifically disaster search and rescue, and relief operations.

Given the fiscal and political context of the Philippines’ military modernisation, China’s concerns over the purported destabilising effect of Philippine modernisation appear to be unwarranted. While it is true that the purchases will likely complicate any expansionist move by Beijing, Manila’s purchases have remained consistent with its goal of obtaining a ‘minimal credible defence posture’. Territorial claims are best enforced through less belligerent acts, and having a presence in contested waters is still more important than sheer offensive capability. The Philippine government seems to have learnt its lesson from China’s de facto occupation of Scarborough and will seek to deny Beijing a pretext to take over Ayungin Shoal.

Manila could leverage a heavy-handed Chinese response, even by non-military assets, to its advantage. On 30 March 2014, a resupply mission to Ayungin Shoal—fully covered by the media—was used to underscore the narrative of a seemingly David and Goliath struggle between Manila and Beijing. But aside from a concerted PR push, Manila has also been pushing at the diplomatic front. In short, Manila seemed to have recognised the asymmetrical options it has at its disposal.

For now, as paradoxical as it may sound, the combination of a more cautious, albeit still assertive China, and a more credible Philippines may allow tensions in the South China Sea to simmer down.

Higher animal feed cost due to the global rise in the price of soya and corn meal “is beyond our control”, said Agriculture and Food Industries Minister, Datuk Seri Dr Ronald Kiandee, today.He said prices have risen since four months ago and the realit…

All mosques, surau, and musalla (area allocated for praying) in Kelantan subdistricts are ordered to close starting tomorrow until a date to be notified later where all activities including Friday, obligatory, voluntary tarawih prayers are disallowed.T…

There was no element of unfair treatment against six students of the Perak Matriculation College in Gopeng who were compounded RM1,500 each by the Ministry of Health (MOH) for not wearing face masks yesterday.State Health, Science, Environment and Gree…

vThe National Registration Department (NRD) has detained two individuals including a private doctor suspected of being involved in a syndicate falsifying the information of over 200 births since 2009.Its director-general Datuk Ruslin Jusoh said the doc…